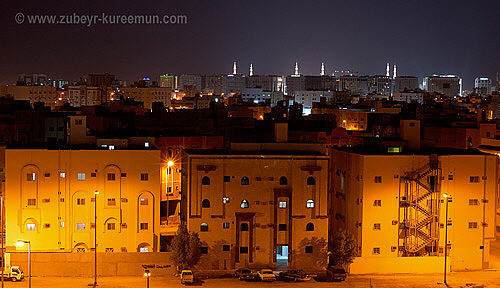 AL – MEDINA AL – MUNAWWARA – Al-Medina al-Munawwara (the Lighted City) also known as Madina an-Nabawi (the city of the Prophet), is located in Hijaz, on the western part of Saudi Arabia, some four hundred kilometers north of Mecca.

Medina has a population of about 600 000 inhabitants.

Medina is second to Mecca in spiritual importance among Muslims.

The presence of the Prophet`s Mosque (masjid al-Nabawi), the burial place of Prophet Muhammad (PBUH) and many other historical sites in Medina attract millions of visitors every year.

As Islam began to have a greater influence among the Arabs of Makkah, the Qureish tribe who were the guardians of the Ka`ba and the 360 idols around it, feared that they would lose their privileged position among the Arabs.

They devised all means to stop the spread of Islam which is threatening their social, economic and religious status.

They intensified their persecutions on the the Prophet (PBUH) and his companions (R) to such an extent that the latter were compelled to leave their beloved homeland, their dear ones, and their belongings behind and migrated to Medina to be able to practise their religion.

This event is such an important one in the history of Islam that during the caliphate of Umar bin Khattab (R), the caliph chose this event to mark the beginning of the Islamic calendar.

Al-Medina al-Munawwara in the 21st century

Al-Medina al-Munawwara becomes more lively during the hajj and Ramadanseasons.

During these seasons all the markets and shopping centers around the Prophet`s Mosque are crowded with visitors and are opened till late at night.

In fact, the economy of Medina depends mainly on the millions of visitors it welcomes throughout the whole year, more particularly during hajj and Ramadan seasons, by offering services such as transport and communication facilities, food and accommodations services just to mention a few.

The old hotels around the mosque of the Prophet are being replaced by new ones.

This picture depicts a contrast between the new hotels and the old ones.

There is a large area in the middle of the image that has been cleared for new buildings.

In Madina schools start at 7.30 am and end at 1.30 pm except for the month of Ramadan where school hours are normally 10.30 am till 2.30 pm. So expect more traffic at these times.

Next to this building there is an open area where the teenagers of this region used to gather in the evening and at night to play football and to chat.

Still there are many foreigners working in Saudi Arabia (some 5.5 million in 2006) although the government has made efforts to reduce its reliance on non-Saudi labor (the total population is around 27 million in 2006).

Muntazah Baydah is a recreational park in Madina and is located some 20 km away from the Prophet`s mosque.

The locals used to come here with families and friends to relax and even camp here.

You can hire tents to set up your own camp.

Here the landscape is mountainous and there are lots of thorny plant.

To really explore this area, you will need a four wheel drive vehicle.